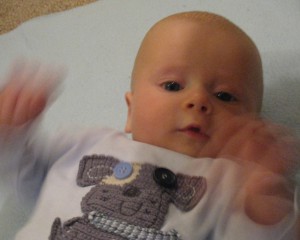 Sam was in great demand this weekend what with two separate dinner invitations for Saturday and Sunday. Sam’s first outing was on Saturday to visit aunt Cara and future uncle Nick and view their shiny new kitchen. Cara and Nick provided Sam’s mum and dad with some very tasty adult food which included some fantastic melt in the middle chocolate puds served with some very yummy home made ice cream – mmmmm.

Apart from a minor screaming fit when we first arrived Sam was in fine spirits and greatly enjoyed watching his parents having a go at the Raving Rabbits game on the Wii. While Sam was happy Nick took the chance to snap some photos with his impressive camera so hopefully some of his shoots will have come out and we’ll have some better quality photos of Sam. 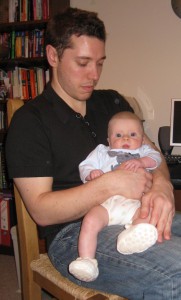 On Sunday we hastened over to visit Matt and Steve at their flat as Steve was cooking up a large beef joint and needed some extra stomachs to help put it away (I’m always glad to help with such matters). Duncan also came over and was full of stories about his recent trip to New Zeland and brought along photos from his first ever sky dive. We all ate very well, the beef was delicious and came with all the trimmings and for dessert we had ‘chocolate eruptions’ which sounded very complicated to make but looked fantastic when they came out of the oven slowly oozing chocolate sauce from their tops (and  they tasted great too). Duncan also took some Sam shoots with his impressive camera so hopefully he’ll send us a few more photos of Sam that we can share with you all soon.

The photo on the right is the only picture that we got of Nick and Sam from the weekend… don’t you think that Nick looks like he thinks Sam is about to explode at any moment? Caption suggestions anyone?