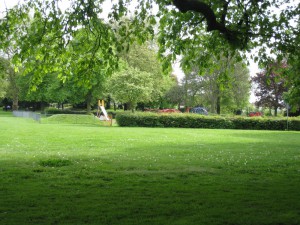 It’s been a good few years now since I first went past Wandle park tram stop while on the way to Ikea with Rich. When I first saw it I said to Rich that I thought it was a fantastic name for a park – I even went so far as to say that if I had a park I would want to call it that. So every time we travel past that stop on the tram and notice the Wandle Arms pub on the way I always think to myself that one day I’ll get off and go have a look round.

Well today Sam and I did get off – though we didn’t intend that Wandle park would be our destination, a naughty man who shouldn’t have had his bicycle on the tram caused a big delay while extra transport people came along to evict him and the offending bike. So instead of going a few stops further down the line we got off at Wandle park instead and had a wander around. 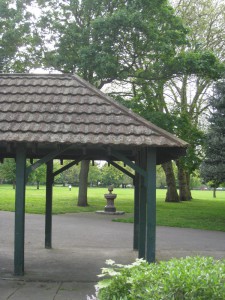 The weather today was glorious – lovely and sunny and warm with a slight breeze to keep you feeling refreshed. We started out by having a quick look at the playground and Sam even had a very gentle go on one of the swings while being held on my lap – he really seemed to enjoy it. As the other climbing frames and spinny things were a little too old for Sam we went off to see what else the park had to offer. That’s when we came to a little section that looked like in better times to have been some sort of small formal garden and nearby that was this little monument thingie which was engraved with the date the park first opened in 1890.

I’m happy to say that this park has won some lottery funding to pay for improvements including the raising of the River Wandle (which runs underground through the park), sadly the Fuzzy family will have probably moved up North by that time but maybe one day we will get to see the park after all the work has been completed.