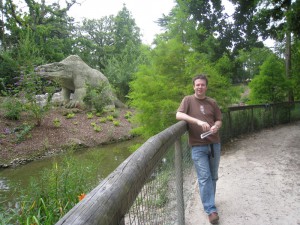 After a lovely leisurely lie-in (ahhh – I do love Saturdays!) we all set off on the bus to explore Crystal palace. We stopped off first at a market that included craft stalls, but were rather surprised by just how small it was with only a handful of stalls including one very determined lady trying to sell her cards. We did buy a few things including some second hand baby clothes for Sam which he’ll need for winter.

Once we had exhausted the little market we wandered back towards Crystal palace park to have an explore. We started at the main entrance and followed the central path through the park which seemed to be all steps going downwards. Most of the top half of the park seemed to be deserted and we even came across a slightly eerie empty fun fair.

Because we had to find somewhere to stop to give Sam his lunch we went into the Sports centre and sat (all alone) in the little cafe there with a cup of tea while trying to persuade Sam to eat his food. Thankfully once we had continued past the Sports centre and down some more steps we came into a more foresty part of the park which was much more popular. Sam then had his nap while Rich and I pushed him round the Victorian model dinosaurs which were tucked among the trees as part of a display that was 150 years old. We really enjoyed spending some time with these odd looking creatures, especially Rich who even went so far as to name the dinosaur in the above photo “Toothy Bill”. More photos can be found in the improved photo gallery.