Last weekend we were invited over to a friend’s flat in Manchester for a lovely Halloween party with their 3 year old Ivy as well as another couple we know who have another 3 year old called Eleanor. The kids all got to wear costumes, little Ivy had requested to be a pink alien so her mum had made her a fantastic outfit out of pink fun fur fabric. Eleanor got dressed as a corpse bride and did a great job on her own face paint by surrounding her mouth with red lines which looked pretty scary. 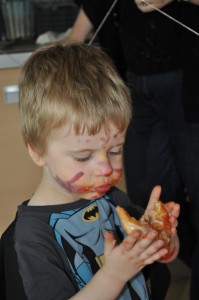 Sam also had a go with the face paint but he wanted to try all the colours and ended up looking quite spotty. Sam was supposed to be a bat/batman, I had sewn some bat wings to the back of his batman tshirt and borrowed a batman mask from a friend, but because the mask only stayed on for 2 seconds and because Sam had done an interesting job with his face paints he didn’t look much like anything 🙁 Emily also wore fancy dress – we still had the ‘mummy’ baby grow that Sam was given for his first Halloween and Emily fitted it perfectly!

After we all had eaten plenty of tasty party food (including some fantastic red squiggly fairy cakes with eyes and bat shaped cookies) the kids then got to play party games. My favourite was where they all had to try and eat donuts which had been hung on a string without using their hands to help them. They all eventually got the idea and spent ages trying to get mouthfuls while us parents watched and laughed ourselves silly. Sam got covered in the orange icing that was on his donut – but because of his alternative face painting it wasn’t too noticeable. They then all had a go at bobbing for apples which at least ment they ate one healthy thing during the party!

We all had a really great time and Sam is already asking to attend more Halloween parties so I’ll have to start thinking of something exciting for next year.