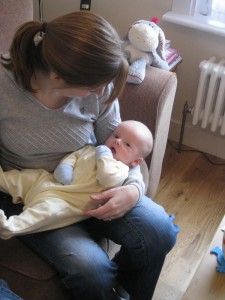 Time has really flown by. Our little Sam has already reached the grand old age of 3 months and while I can clearly see (and feel – oomhp he is getting heavy!) that he is no longer a tiny baby I can’t quite believe it yet. During the last 3 months Sam has changed and developed so much that looking back at some of his early photos it’s hard to believe that he is the same baby.

Sam can now do the following:

– find his hand, chew it happily and almost get all of it in his mouth at once

– lift his head, look round and then head butt you when you are least expecting it

– smile winningly and be pretty much irresistible, especially when he is supposed to be going to sleep 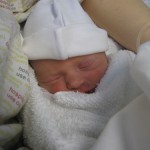 Sam’s auntie Cara came round to visit him today and was also impressed by how big he is now. She did a great job of holding him and giving him lot’s of attention and he enjoyed having another minion around at his beck and call. Cara also brought me some lovely Christmas presents – thanks so much Cara & Nick – I love them!

For those of you that have forgotten what Sam looked like as a newborn here he is – only just born, weighing only 5 lb 7 oz