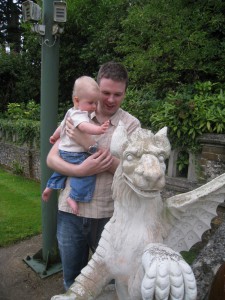 Wanting to make the most of some summery weather Rich’s good friend and work colleague Steve decided that it would be a good idea to have a small barbecue for the elite at work. Obviously Sam and myself were also invited 🙂

Steve was very organised and did all the shopping, food preparation and cooking himself and even managed to get food cooked at the time that it was planned (a rare occurrence at a BBQ). We both ate well as Sam was very good and had his post dinner nap without a fuss. After Sam’s nap there was enough time to watch a croquet game (which Sam found hilarious – check out the video on Rich’s blog) as well as meet some of the older staff members as can be seen on the left.

We then had to dash off, but luckily the chicken had just finished cooking so with the buggy and a skewer of chicken each we headed off for our train home.