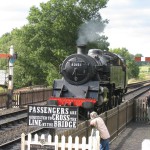 Last weekend we decided to take a trip to see the Bluebell railway near East Grinstead. We packed up a picnic lunch and made the slightly awkward (bus-train-bus) trip to Kingscote station where we boarded a steam train to Sheffield Park station. I’ve heard people discussing the railway before but wasn’t prepared for the scale of the project – there are three stations and at least three different trains running. You can see pictures from the visit in our picture gallery.

After arriving at Sheffield park station we found a picnic area where we had sandwiches (Sam had a jar of food) and fended off a bunch of determined ducks before setting off for the nearby National Trust park. I was a bit disappointed with the park as the waterfalls and cascades had all dried up for the summer 🙁 However, there were a lot of interesting trees and Jessica was excited to spot a Tea-van.