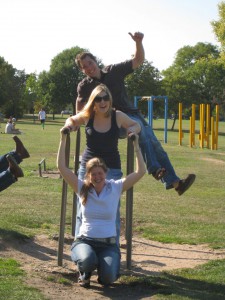 Last weekend Cara and Nick were kind enough to invite us over for a make-your-own-pizza session at their flat. I made a very nice mushroom, chicken and chorizo pizza and suitably nourished we set off to visit a local farmers market.

The farmers market was to be held in a local park and a large sign outside advertised that it ran from 10am until 8pm. Strangely none of us questioned why a market would run for 10 hours on a Sunday but we soon found that it only ran until 3. Having missed the market thanks to someone’s creative graffiti we looked for something else to do.

Sam had a go in the play-park before draining a bottle of aptamil and going to sleep. The ‘adults’ had an ice cream and went to play on what appeared to be some kind of assault course.

There are quite a few pictures from the day which we’ll get round to putting in the photo library soon. However, I wanted to share this one where we attempted to take a group photo on some parallel bars. The plan was simple – I would set the 10 second timer, run and vault onto the bars – taking my place in the photo. I completely failed, bouncing off the bar and landing on my rear. After this Jessica suggested that she could initiate the photo as she didn’t have to do any gymnastics to get in shot – how sensible 🙂