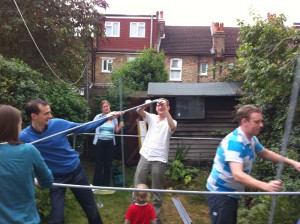 How many engineers does it take to construct a gazebo?

This Saturday was not the best day to pick for a BBQ – the heavens opened and tipped down a very large amount of rain on a select group of us who had hoped to enjoy a nice summers day with a little charred meat. 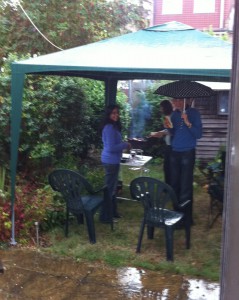 To be honest we should have expected things to go wrong from the time the host realised mid BBQ set up that he only had 10 little briquettes and sent Rich out to procure some more. On top of this our generous host had also admitted that he had no chicken in the house – only burgers, sausages and lamb kebabs!

While the BBQ started to warm up we may have been fooled into thinking that everything might work out and then as the first burgers were cooked the rain started to fall. At this point a brand new gazebo was pulled out of the shed and while all the men present started trying to figure out the instructions and work out which poles went where, the rain began to come down properly.

Much fun was had with poles coming apart at different corners and there was a brief worry that the gazebo may in fact be too large to fit in the garden… but somehow with a lot of frantic work and some help from Sam a gazebo appeared.

We all had a great time though (Sam especially loved the novelty of being able to run in and out of the rain) and were very pleased with ourselves for being able to beat the elements. So many thanks Richard B for giving us all a great time – I wonder what challenges you’ll think up for us at your next party?