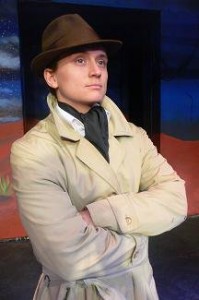 This evening I got the chance to join a group of work friends on a trip out to the Warehouse theatre in Croydon (Rich very kindly stayed home with Sam so that I could go). We started out by having a very tasty dinner in the lovely ‘Anna’s Thai’ restaurant (because Rich couldn’t come I made sure to have his favourite dish as it wouldn’t have been right going there without one of us ordering it). We then all dashed off to the theatre and made it there just in time to get a seat before the show started.

Dick Barton used to be a radio show produced by the BBC which is now long forgotten by most people apart from the good residents of Croydon who have been lucky enough to see some of the theatre productions done by the Warehouse which are loosely based on the original show. The productions are incredibly daft and full of bad jokes and silly songs as well as having the strangest story lines possible.

The Warehouse theatre stopped being able to do Dick Barton productions a few years ago due to the BBC refusing to give it permission to use the Dick Barton name. So for the last couple of years we have had ‘Young Dick Barton’ instead which gets around the permission problem. I loved the show (which I think is the 4th or 5th Dick Barton production that I’ve seen) and highly recommend it to everyone, so if you can still get a ticket be sure to go along.