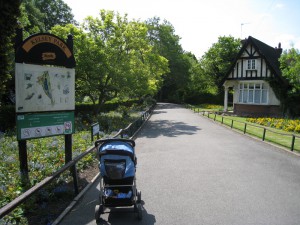 Sam and I decided that as the weather was so beautiful this morning that we should go out for an adventure and find a new park (which wasn’t called Morden Hall park) to explore. I had a quick look at our local council web pages and was again unable to find any useful or helpfully laid out information on it so I had to resort to doing a search on google maps. Well google maps certainly didn’t disappoint as it found me a couple of possibilities including a place called Kelsey park.

Kelsey park is just so lovely. I had no idea that there was such a beautiful park relatively close to where we live – if I had done then I think I would have probably spent the last few years going on to everyone that I know about how it is the best park ever – and I wouldn’t have been exaggerating. 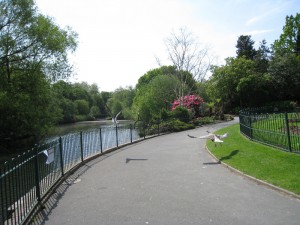 When you first enter the park you think to yourself how lovely it is – but little do you realise what lies further down that path… a little out of sight from the entrance is a wooded path way which when we were there was next to some slightly flooded ground. The flooding is caused by some of the water from the river that they’ve dammed at a few points in the parks to create a lake for the wild birds that visit there. On the lake there are geese, ducks, swans, coots and even a number of herons who have a few nests there.

While walking round the park we also discovered some other animal life, one very tame and friendly cat (who perhaps belongs to the park keeper?) lots of squirrels and a good few pigeons and other non-water birds. Apart from the wildlife, beautifully tended green areas and flower beds there is also a great children’s playground, a putting course and cafe (which only open at the weekend). There are also events held through out the year which hopefully Sam and I will be able to join in at soon.