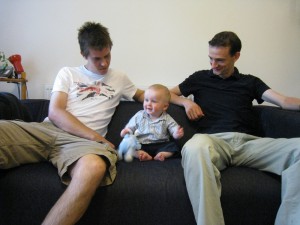 The family Felton spent today out at Steve’s Birthday bash which took the form of a few hours out at a local park where the men became boys and played a bit of rounders as well as general larking about with a football and a rugby ball. Not that anyone knew how to play rugby… Steve only brought the thing along because he is Mr. Mars ball man and he managed to win about 11 different balls on the recent Mars online competition.

So the men messed about with all the balls, I had a couple of turns at rounders and the rest of the time Sam and I amused ourselves by watching the action from the sidelines. After the blokes had tired themselves out and decided they now needed food we all headed off back to Steve’s new flat and ordered a load of Indian food. Sam spent some time amusing his fan base and being generally cute… just look at him in that little shirt – isn’t he the most gorgeous baby ever? He decided that he didn’t want to sleep at Steve’s place though so after we had eaten our dinner Rich and I took noisy Sam back home and tucked him in to his cot where he went out like a light.