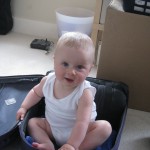 Yesterday I made my annual trip to Silverstone to help marshal the spectators at the British Grand Prix. It was a strange event this year as it was supposed to be the last time we’d be at Silverstone, but doubts about Donnington mean many people expect to be back at Silverstone in 2010. Bad timing also meant that I missed my first Father’s Day so me and Jessica decided I could celebrate being a Dad on the 22nd.

We’re usually given a free programme and sometimes a baseball cap but this year the organisers also gave us a polo shirt – maybe they’re getting rid of all the stock before they lose the GP! 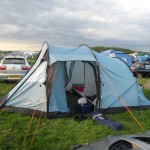 We had a capacity crowd of 120,000 on the Sunday with a large number of them sporting Jensen Button caps. Unfortunately for them Button was unable to improve on his grid spot, finishing in sixth. Vettel seemed to be in a completely different race and had no trouble leading for the majority of the race before winning. Hamilton was fun to watch but wasn’t able to get anywhere near the points – on the warm down lap he decided to do a donut right in front of where we were marshalling… which was nice.

Thankfully it looks like we’ll be required next year for the marshalling regardless of where the GP takes place. I’ve managed to get to eight consecutive ones now and it is something of a tradition. There is even talk of two Grand Prixs in Britain next year with the possibility of us hosting the European one.

As usual I wasn’t allowed to take any photos of the on track action so if you want to see more try the official site here.