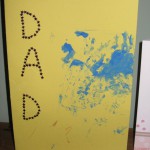 I got back after Sam’s bedtime on Sunday so we celebrated Father’s Day today instead. Samuel had been busy, buying me some of my favourites chocolates along with a mug and something to soothe my aching feet. I was particularly impressed with the card that he’d literally had a hand in. As you can see on the left, Samuel did his first bit of painting especially for me – his Mum added the lettering.

This afternoon I took Sam for his first trip to the swimming pool. Initially he was a bit overwhelmed and sat fairly stationary in the water looking around at the massive unfamiliar bath into which he’d been placed. It didn’t take him long before he was splashing and kicking water just like he does at home. He did really well and spent 20 minutes in the pool before being towelled off and given a bottle. I look forward to taking him swimming again as he seems to really enjoy it.