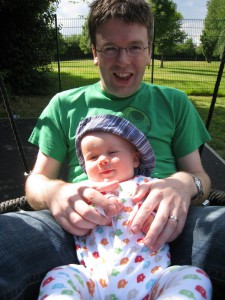 As Rich wasn’t going to be returning from Silverstone until yesterday evening we had prearranged that he would take this Monday off and have it as his first fathers day instead.

Sam had chosen some presents for his Dad which he thought he would enjoy as well as making a very lovely card (which you can see on Rich’s blog) at one of his play groups. After Rich had had a lovely long lie in to help recharge his batteries we then had a bit of a lazy morning while planning what we were going to do to mark this special day.

Rich decided that he really wanted to take Sam out for his first swim and after a bit of calling round the local pools to find out the opening times we headed off to our nearest pool, bought Sam a special swimming nappy and were set to go. Rich went in with Sam armed with his favorite bath duck while I watched them enjoying themselves from the window at the side of the pool.