Last week we spent a happy week up North at Center Parcs in the Lake District. We travelled up on the Friday and attended my cousins wedding on the Saturday. Samuel was reasonably quiet during the service except for the last bit where he was allowed to roam into a section of the church with toys… members of the congregation with good ears heard a crash, shortly followed by an “Oh oh” from Sam. At the reception Samuel played with the toys that his Great Aunt had bought for him and was fascinated by the disco where he spent a while doing his signature dance. 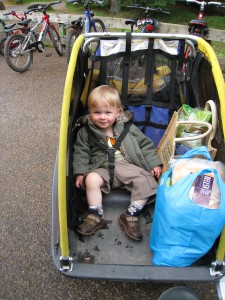 Sam relaxing in his trailer

On the Monday we made the 2 hour drive to the Whinfell Forest ‘branch’ of Center Parcs. Samuel brought a healthy supply of minions in the form of Cara, Nick and his Grandparents. Our lodge was reasonably close to the village centre so we didn’t have to use our bikes too much. We enjoyed our last Center Parcs trip but this one was even better as Samuel is walking around and could enjoy things like the little trolleys in the park market. Everything was quite busy as it was half-term but we got the chance to play a bit of badminton and discovered that I’m rubbish at table tennis. Whinfell is a red squirrel conservation zone and we had spotted quite a few of them during our five day stay. It’s the first time I’ve seen the (smaller) red squirrel – they seemed much more bouncy than their grey cousins, jumping about all over the place. 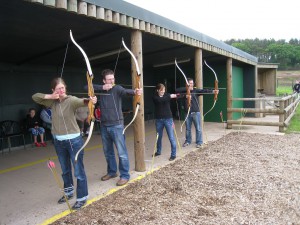 We had a lovely time and I think the minions did too. Me and Jessica got to have a bit of free time, trying out some archery and ensuring that Jessica got her standard strawberry and cream frappuccino. Samuel always develops a huge amount when there are so many people around to pay him attention.When we started the holiday he was saying around 5 different words and now he’s approaching 30 words – the days of everything being a car seem to be behind us 🙂